California author Lynda McDaniel may base her mystery novels in the Appalachian Mountains, but her characters and themes are universal. “These stories explore all kinds of trouble—murder, missing persons, kidnapping, con artists,” McDaniel explains, “but in the end, they’re really about people and how we interact with one another.”

In March of this year, McDaniel moved to Eureka, Calif., where she finished her fifth book in the Appalachian Mountain Mysteries series, Deep in the Forest. She says she chose Humboldt County in part because of the similarities between life there and life on her small farm in the mountains of North Carolina. “All the things I enjoy here—writing, hiking, wildflowers, birds, gardening, bluegrass music—took root there many years ago,” she says. “Back then, I made mistakes by the wheelbarrow load, but I wouldn’t take anything for those experiences. These novels pay homage to the people who taught me so much about nature and life and kindness.”

McDaniel even learned to write professionally there—in a town of only 200 people. “The director of the Campbell Folk School in Brasstown, N.C. asked me if I’d like to learn PR. I should have answered, ‘What’s that?’ but I jumped at the opportunity,” McDaniel recalls. “I took to it like ink to newsprint and haven’t stopped writing since.”

Before turning to novels, McDaniel wrote more than 1,200 articles for major magazines in addition to 20 books. One of her nonfiction books on writing, Words at Work, won the National Best Books Award in Writing & Publishing. For the past 10 years, she also has served as a writing coach to clients who want to write and publish their own books.

McDaniel wasn’t sure how her first semi-autobiographical novel in the series, A Life for a Life, would connect with readers, but their positive response has led her to write five more (including a prequel novella, Waiting for You). “My readers told me they love the characters, especially Abit Bradshaw, a young man struggling to find his rightful place in the world,” she says. “He started in a supporting role, but I listened to my readers and gave him starring roles from then on.”

Della Kincaid, the other lead character in the series, is loosely based on McDaniel's life. “We’re both journalists who left the big city for a so-called simpler life in the mountains," she explains. “And we both quickly learned that life is complex, no matter where you live.”

McDaniel is planning to set an upcoming mystery along the Lost Coast of California. “I can well imagine the kinds of trouble Abit Bradshaw will get into here!”

“THE CHARACTERS COME ALIVE because McDaniel takes the time to explore the wellsprings of their pasts and their reactions to adversity. Readers looking for a murder mystery strongly centered in regional culture will relish this story’s superior tension.” ~Midwest Book Review

“PERFECTION! Lynda McDaniel has clearly hit her stride with Murder Ballad Blues. I loved each of the first three books in her Appalachian Mountain Mysteries but this fourth one is especially noteworthy. With its excellent plotting and pacing, I savored it from beginning to end.” ~Y.G. Yaldezian

“REMINDS ME OF TO KILL A MOCKINGBIRD ... finding your books is like finding a rare jewel. I don’t want them to end. You are a treasure as a writer. Thank you!” ~J.M. Grayson


“I WAS SO ENGROSSED IN THE STORY that I found it hard to break away for other activities. This author develops the characters in such a way that they feel like friends, and I miss them after finishing the book.” ~D. Tuttle

Award-winning author Lynda McDaniel pays tribute to the many life lessons she learned in the mountains of North Carolina in her five-book series, Appalachian Mountain Mysteries

In the 1970s, award-winning author Lynda McDaniel carved out a new life in the mountains of North Carolina. Decades later, she realized how often the stories she shares begin with, “When I lived in the mountains of North Carolina ….” Her five novels in the Appalachian Mountain Mysteries series pay homage to the people of Appalachia who taught her so much.

“All the things I enjoy—writing, hiking, wildflowers, birds, gardening, putting food by, early music, bluegrass music, solar energy, ecology—took root while I lived on a small farm in North Carolina,” she explains. “I made mistakes by the wheelbarrow load, but I wouldn’t take anything for it. I learned just about everything that matters to me today.”

Real places like Boone, Blue Ridge Parkway, Mt. Pisgah Inn, Hanging Dog, Beaverdam, and Linville Falls have been fictionalized to create the setting for these novels about murder and greed vs. kindness and second chances.

Della Kincaid, one of two lead characters in the series, is loosely based on McDaniel's life. "We're both journalists who left the big city for a simpler life in the mountains," she explains. "And we both quickly learned that life is complex, no matter where you live."

Abit Bradshaw, the other lead character, started as a supporting character, but due to reader response grew to become the most important character in the series. His life is chronicled from age 15 through 37 (to date) in the series. "I vividly recall the first time he showed up in my writing. I had no idea he was about to make the scene. He just popped into the story and wormed his way into my heart," McDaniel says. "Gradually I made more and more opportunities for him. And when the reviews came in? People told me they couldn't wait to see Abit again. I was more than happy to oblige."

The series continues with the fifth book, Deep in the Forest. McDaniel is already working on book six.

"My writing career began at the end of a gravel driveway lined with tall pines and sun-dappled daffodils," McDaniel says about her 40+ years as a professional writer. "I recall that day with the fiercest clarity: walking up to the massive oak door with a hand-forged handle, tugging on its surprising weight, and entering a world of art and craft, music and writing at the Campbell Folk School. I hung around like a groupie, happy to help in any way I could. One day the director asked if I’d like to learn public relations. To be honest, I should have answered, 'What’s that?' Instead, I said sure and took to it like ink to newsprint. I haven’t stopped writing since."

McDaniel went on to write more than 1,200 articles for major magazines and 20 books, several of which are award winners and Amazon bestsellers. For the past 10 years, she’s served as a writing coach to clients who want to write well at work, as well as write and publish their own books.

GREAT !! BOOK Lynda McDaniel can write. This is one fine read. A LIFE FOR A LIFE is outstanding, great character development, real and believable. A good mystery that reads like a literary piece. Della Kincaid is a wonderful. READ THIS ONE. —Wooley, Amazon Vine Voice Reviewer.​

Five Stars! Lynda McDaniel has that wonderfully appealing way of weaving a story, much in the manner of Fannie Flagg. The mystery isn't a fast-paced one, but rather one that brought me into the lives of many in Laurel Falls. The tale immediately drew me in, into the town, into the intriguing mystery, and into the people. [This mystery is] a real treat to read and made me anticipate meeting the characters in yet another installment. —Deb, Amazon Hall of Fame, Top 100 Reviewer

Marvelous read! A compelling story told through the eyes and voice of two remarkable narrators who seem like polar opposites but are deceptively similar. They possess the same hopes and dreams for a new life. — Yvette Klobuchar, author of Brides Unveiled

An earlier reviewer's comparison to “To Kill a Mockingbird” is justified. I’ve read and enjoyed lots of mystery novels, including series by NYT best-selling authors, but sometimes I've been disappointed by poorly drawn one-dimensional characters or contrived plots. Not with this book! I was held through to the end, with none of those distractions. — Miles Glazner 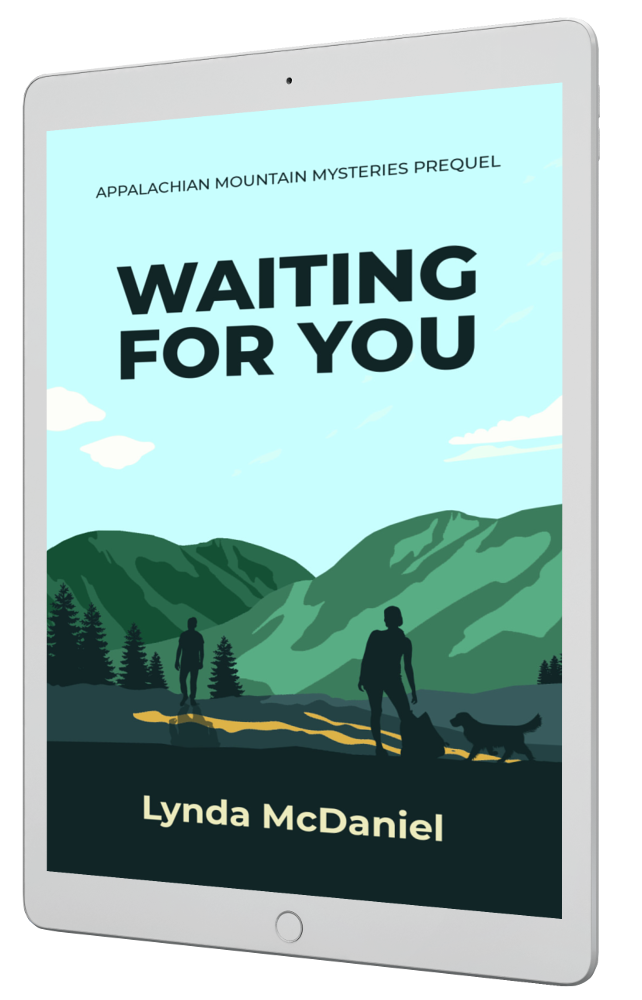 Before you go, don't forget to grab your free copy of Waiting for You, the prequel to my Appalachian Mountain Mysteries series. (You can't get it anywhere else!)  Just click the cover to get yours.